On Sunday, April 15th, 2018 a tornado touched down at 6:16 pm EDT in Coventry Township, Ohio. This EF-1 Tornado had an estimated maximum wind speed of 90 mph and was only 25 yards wide. The total path of damage was less than a tenth of a mile.

Watch the top right of the screen! Oh my! The National Weather Service just declared this was an EF1 tornado in Coventry Township. pic.twitter.com/pgf45hcd59

But how did this happen? There wasn’t supposed to be any severe weather on Sunday.

The loop of pictures below is the composite radar images at the time of the tornado. It shows the line moving through from 6:00 pm to 6:30 pm in five-minute intervals. This loop shows the southerly (out of the south) storm motion, but the line of stronger showers moving westerly (out of the west).

Can’t see the line? Hows this?

Textbook LEWP in eastern Ohio, and CLE has decided to tornado warn almost all of its embedded circulations pic.twitter.com/Kinj9vYBjb

This is the velocity (wind speed and direction) of the same line of storms. This loop is roughly 30 mins after the tornado touched down, but clearly shows the notches in the line of storms. Let me show you what I mean:

Instead of the line of storms being linear, this front started to spin. This image shows the areas of rotation on this line.

So how did this happen?

There are two storm dynamics we have to look closely at:

CAPE: Convective Available Potential Energy. A measure of the amount of energy available for convection. CAPE is directly related to the maximum potential vertical speed within an updraft; thus, higher values indicate greater potential for severe weather. Observed values in thunderstorm environments often may exceed 1000 joules per kilogram (J/kg), and in extreme cases may exceed 5000 J/kg.

SHEAR: Variation in wind speed (speed shear) and/or direction (directional shear) over a short distance within the atmosphere. Shear usually refers to vertical wind shear, i.e., the change in wind with height, but the term also is used in Doppler radar to describe changes in radial velocity over short horizontal distances.

Here is the 12z (8 am EST) sounding from Pittsburgh that Sunday morning. There are two numbers I want you to see that are highlighted in red boxes.

The first number, to the left, is the CAPE values. 92 joules per kilogram. Remember from the definition above, we need over 1,000 J/kg to get thunderstorms. So with 92 J/kg, there is absolutely no energy to sustain storms. So the culprit for the tornado is based solely on shear.

This meets the criteria for a high-shear low-CAPE event.

A weather professional reading this might understand that these events really only occur for the Southeast United States during winter, but during the spring the Ohio Valley has seen these events too. 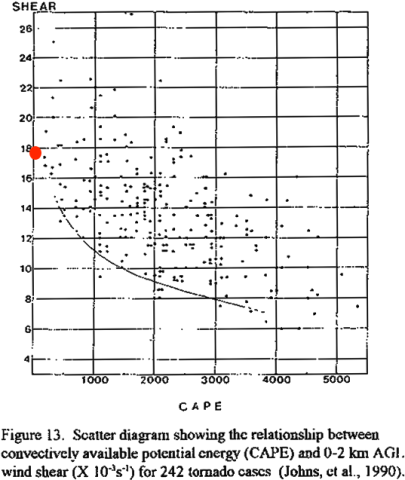 Our Summit County tornado is indicated by the red dot.

The event would be above the threshold line and thus meets the criteria of being able to produce a tornado according to this study.

You can see from the observations at CAK (Akron-Fulton International Airport) the winds at the time of the tornado. The cold front pushed through kicking up the winds with a peak wind gust for the day at 33 mph.

The winds are calm at 15:00 (3:00 pm), but the kick us and start to come out of the southeast at 18:00 (6:00 pm). Then the winds rotate drastically clockwise over the next two hours. This means that there were strong veering winds (clockwise rotation) with this line of storms. This is the spin that caused rotation.

So with the wind shift off the cold front and the increase of wind speed, it was enough to get a quick spin up tornado. Now there are a lot more dynamics that cause an event like this, but this a watered down version that everyone can understand.

Did we know that there was a slight possibility that this event could happen Sunday?

I remember having the conversation with Meteorologist Alexis Walters and Operations Supervisor Karl Bloom on Saturday about how this could play out.

However, these events are so rare in Ohio and the dynamics were not exactly favorable for a tornado. More times than not these events will not produce a tornado and therefore we did not mention the small possibility of a tornado. However, we did mention that we were monitoring the storms tomorrow and would let people know if something changed. As we know now, we found the unicorn of weather dynamics that did produce a tornado.

From the time the storms started spinning we were keeping an eye on that system and were ready to cut into programming to keep you safe.

Going forward we will continue to monitor each weather event and will let the public know when there is a credible set up for a severe weather event.